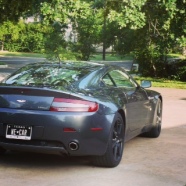 In honor of Aston Martin’s centenary, I drove an Aston Martin V8 Vantage. I know, I know – it was the least I could do.

“It’s fast as stink, and graceful all the way.”

This summation of the V8 Vantage’s most winning qualities comes straight from this particular car’s owner, my friend Steve Orrell.  Steve very (very!) kindly allowed me to photograph and drive this amazing beast. I really enjoyed talking to him about the Aston, and I really enjoyed driving it! 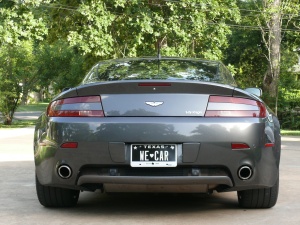 The V8 Vantage is Aston’s smaller sports car (its other models include the DB9, Vanquish and Rapide – read all about ’em here). Given that this particular 2007 model has a 4.3 liter V8 engine and a 190 mph top speed, “smaller” is very much a relative term. There really is nothing small about this car, other than the size of your bucket list once you’ve been behind the wheel.

Yes, the Vantage is powerful. But, as Steve points out, you could easily reach or exceed its performance numbers with, say, a properly-equipped Ford Mustang Shelby GT500. What sets the Vantage apart, what sets all Aston Martins apart, is the design. 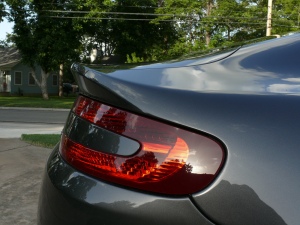 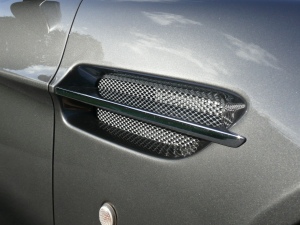 I asked Steve what his favorite part of the Vantage was. He cited the design, and I agree. It just doesn’t get any better. 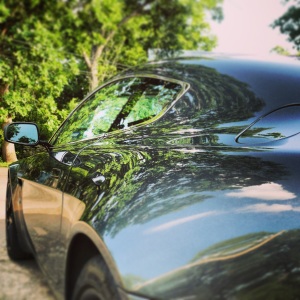 Much to my delight, Steve’s Vantage has a six-speed transmission (aka, it’s a true sports car). I couldn’t wait to row through the gears, but I did want to properly document for you, dear readers, just how lovely the interior is. It more than matches the exterior in beauty and quality. 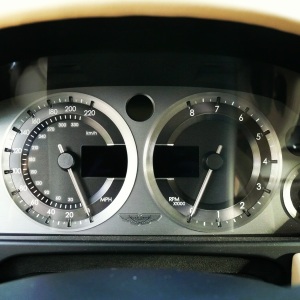 Please note that kilometers get top billing (and that 220 kph is the top speed). Only fitting. 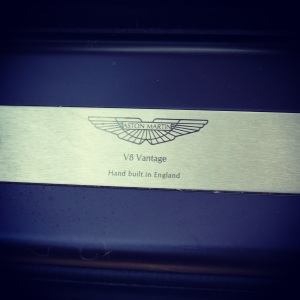 Each Vantage is hand built, and it shows. Every surface feels special, every detail is right.

This is a statement car.

You feel special when you are driving this car. I like feeling special. And I like driving the Vantage!

Somewhat surprisingly, I found the Vantage’s six speed quite a bit more challenging than the Red MINI’s. The clutch has so much travel, I was sure we had reached the Atlantic by the time I had that sucker fully engaged. Stilettos would be a little stressful. (Note: I wore heels of the 3-4 inch variety.) Long legs are encouraged. I didn’t shift as smoothly as I would have liked, although that was probably nervous user error, not the transmission. You can actually travel at low speeds quite comfortably in first gear – not like the MINI, which uses first only as a way to get to another gear as quickly as possible.

But the Vantage wants to be on the open road. On the highway, all eight cylinders firing, this beast knows what to do, and loves it. I could see how a coast-to-coast road trip in this thing, V8 burbling all the way, would be quite intoxicating. Or even a 35-mile highway cruise to the nearest Nordstrom shoe department. Handily, your new shoe purchases should fit in the Vantage quite well. Especially if you don’t bring a passenger.

I have always admired Aston Martin, particularly under the leadership of Ulrich Bez, but a brand as small as Aston is limited in what it can do, by economics if nothing else. This doesn’t matter too much when you do one thing as well as Aston, but it does mean that we see fewer models, fewer trim levels, fewer new engines, etc. In comparison, look at Bentley or the high-end Audi models, which can draw on corporate parent Volkswagen’s resources for R&D, marketing, you name it. In the global car business, it pays to be a big dog. Or have a big dog for a friend.

Interestingly, Aston just this week announced a partnership with Mercedes-Benz’s AMG (M-B’s in-house skunkworks) to develop V8 engines and other technology. The sages at Top Gear digest this development here. It sounds pretty promising to me, but I’ll reserve judgment until we start seeing the fruits of that partnership. At least Aston didn’t sell itself to China!

Now, why the scorecard? How did the Aston beat me? Well, not two hours after I drove the thing, I became very sick and could barely get out of bed for the next three days. I’m sure there is a logical medical explanation for this, but I do sort of wonder if the Aston just chewed me up and spit me out. How embarrassing. If this is the case, I demand a rematch!

Very, very many thanks to Steve Orrell for generously sharing his car with me (and you!), and to Steve, Leigh-Anna and Asa for sharing their time. I had a blast!

← Hungarian GP This Weekend! Well, isn’t that a Kick in the…Starter →