Day One of Acronym Racing: ALMS

On the heels of an uncharacteristic downpour, today dawned beautiful and “fall-ish” in Austin, Texas. Convenient – since I spent 8 hours at the track. (In my seat – bwaha!) Today’s festivities included a GT3 Cup race (all Porsche GT3s), qualifying for tomorrow’s WEC race, and the 2-hour-and-45-minute ALMS race.  This was my first time watching ALMS and WEC races, and I really enjoyed them. Having five different classes of car on the track at the same time keeps things interesting. Even though there are more than 30 cars on the track during the race, they are only racing against the other cars in their class, not against the entire field. And, because of the length of the race, each car has more than one driver. So the car pits at least once for a driver change. It’s all new to me, and I thought it was great!

Here are some photos from the day (be sure to click on each for a larger view). You can also go to the new MOTORista YouTube channel to see a few videos I took of the GT3 Cup and the WEC prototype qualifying.

(Actually, it was a little cloudy early on, wasn’t it? Well, it was sunny at my house anyway.) This is the view from the Main Grandstand of the final turn before the straightaway. 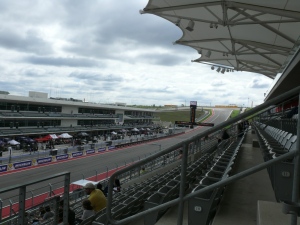 Looking the other direction, this is the view from the Main Grandstand into Turn One. You can see the paddock and the pits on the left. 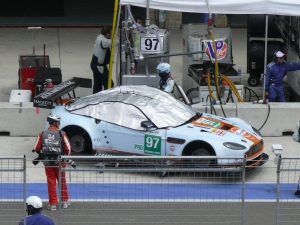 An Aston Martin getting prepped for the WEC qualifying.

Ferraris lined up before the WEC qualifying.

A Porsche without its shoes, and the freakin’ loud prototype behind it.

All Ferraris should be lime green.

A view of the infamous Turn One from the track.

The scene from the grid prior to the ALMS race: 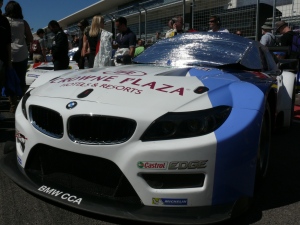 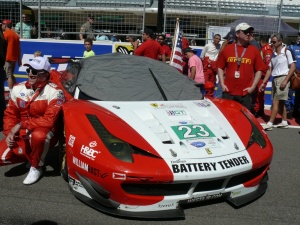 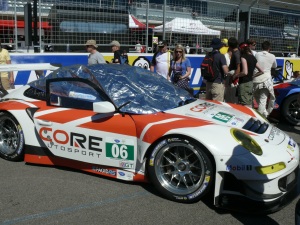 You may not believe a nearly three-hour race could be exciting, but it was. In the GT class, the #3 Corvette led throughout, with the #56 BMW Z4 right on its heels. At times, they were tenths-of-a-second apart. Then, at the very end, the #93 Viper passed the BMW and finished second.

Here’s the #3 Corvette in the lead.

All in all, it was a grand day. See you back here tomorrow with the lowdown on the WEC race!