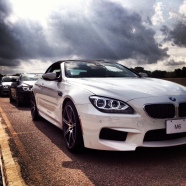 I am not a morning person. I hold very dear the weekend mornings in which I can sleep as late as I want (usually 11-ish; back in the college years, it was mid-afternoon and occasionally evening!). However, some things are worth getting up early for.

A BMW track day is one of them.

Through the generosity of BMW of Austin, I was lucky enough to spend this morning on the track at Driveway Austin (site of my racing class) with instructors from the BMW Performance Driving School and a passel of high performance BMWs. This required leaving the house before 8 a.m. on a Saturday. Not exactly a sacrifice, all things considered. 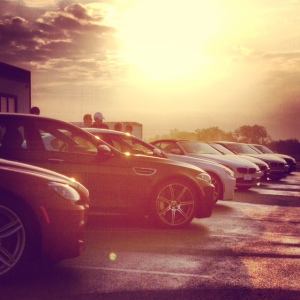 All I knew beforehand was that the session involved spending time on a track with BMW M cars. Beyond that, I had no idea what to expect. Turns out, surprises can be a good thing.

Our group consisted of about 15 people. I was one of two women, and the only woman who came on my own. I parked the Red MINI in the participant lot, next to a Porsche Turbo and various BMW M cars. It was obvious from the cars alone that the members of our group were serious drivers with a need for speed. Excellent!

A fleet of sparkling BMWs was parked in front of the track office. I hadn’t been sure what cars would be there, so I was more than a little enthused to see M6s and M5s in the lineup. A day with M cars is a good day indeed. 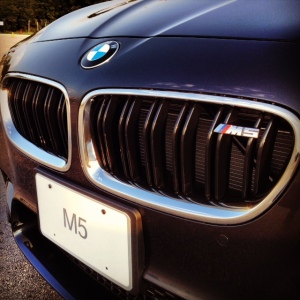 For those of you who may not appreciate the significance of an M car, allow me to explain. Like many car manufacturers, BMW has its regular cars (3-series, 5-series, etc.), as well as high-performance variants. So, for example, the M5 is the crazy hooligan version of the 5-series mid-sized sedan. Same for the M6 and its relationship with the 6-series coupe, which, with its long wheelbase, is known as a “grand tourer.” BMW has just introduced the 6-series “Gran Coupe,” with four doors and, yes, its whacked-out sibling, the M6 Gran Coupe. I got to meet it today. We liked each other quite a bit.

Anyway. About the program…

The session was about three hours and included an autocross and a lead-follow. We began with an overview and basic instruction from a BMW instructor, then hopped in the M cars to take them through a short autocross course (in layman’s terms – because I don’t know any others – driving through a slalom of cones). Everyone got to go through the autocross two or three times, rotating through the different cars, with the instructor calling out tips (and the occasional admonition) over a radio. With my experience of flogging the Red MINI around, I really enjoyed the autocross, although the size and weight of these BMWs takes a lot of adjustment in comparison. The M cars, especially the M6 Gran Coupe, are nimble and agile for their size, but anything bigger than a MINI feels like a bus to me. No matter – a bus with 500 hp works for me any day. 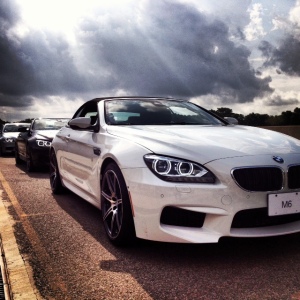 After the autocross, we expanded the fleet to include some regular 6-series Gran Coupes and some 7-series (full-size sedan) cars and moved on to the lead-follow exercise. This utilized Driveway’s longer  “Elevation” course, which includes an abrupt elevation change (think rollercoaster!) and some amazing high-speed straights. We divided into groups of three cars and drove behind the instructor in the lead car. You might think that sounds boring. Let me assure you – it’s not. The course is challenging, the instructors drive quite fast (depending on the abilities of the drivers following), and each car responds differently to your inputs. I honestly have no idea how fast I drove, because I was just a little bit focused on what I was doing, but it was plenty fast, and lots of fun. I had not driven the Elevation course before – hoo boy! I had a blast (literally) in the M6 convertible and in the 760 Li, which is a monster sedan with a V-12 engine. That was my first 12-cylinder experience, and most definitely not my last.

The 760 Li shifter is bigger than the Red MINI.

A takeaway: the optional carbon ceramic brakes are phenomenal. Don’t think of them as an option. Think of them as required. Plus, gold brake calipers automatically make you a baller…

As if all that wasn’t enough, we also got to ride on “hot laps” in an M5 with one of the instructors, Adam Seaman, who just happens to be a professional Formula Drift driver. A log may drift down a river, or a leaf may drift on the wind, but when you’re talking about cars, you’re talking about going sideways at speed. Like, instead of going forward nose-first, let’s go sideways through that turn, how about? Okay!

The hot laps were insane and insanely fun. I’ve never had such a good time watching large objects coming at me sideways. Or flying (literally) through the elevation change on the course. 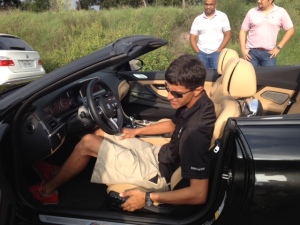 Instructor Adam, a crazed individual, gives us helpful pointers early in the session. Later, he tried to kill us. It was sweet.

THEN, when the driving was over, they fed us delicious barbecue AND pie AND banana pudding, all of which I love passionately. I’m pretty sure I ate more than all the men.

While digesting both the barbecue and my experience, I spent some more time crawling around in the cars. Takeaway 2: get the Bang and Olufsen sound system. It is another option that you should consider to be a requirement. At first, you will want to just listen to the sweet symphony of the M engine, but then you will be happy to be enveloped in the fantastic aural environment of the B&O speakers. Plus, a tweeter automatically rises from the dash. Winning!

What a great day. Many, many thanks to the enthusiastic and patient folks at BMW, to BMW of Austin and to Chris Markey from BMW of Austin for allowing me to participate. When’s the next event, guys??

P.S. To my new BMW USA friends, be sure to leave a comment or connect with me on Facebook. Really enjoyed meeting you guys!

← The Bow Tie in My Driveway Lotus and Me: a Love Story →