Yes, I found an SUV I kind of like. To my eye, the newly introduced Porsche Macan (revealed for the first time at the L.A. Auto Show in November) looks much more like the SUV Porsche should have built all along, rather than the bulbous monster Cayenne.

I know it’s not tall enough for most of you SUV folks. But it sure seems a lot more like a Porsche to me. 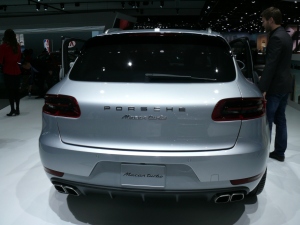 Plus, it just looks good.

The interior felt very car-like. To me, that’s a good thing. 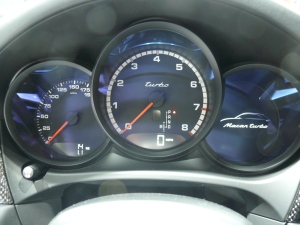 The Macan is one of the few SUVs I have ever sat in that made me want to drive it. Who knew?

There are two trim levels, S and Turbo. Both have a twin-turbo V6, the S with a 3.0L making 340 hp and the Turbo with a 3.6L and 400 horses. The lucky Europeans get a diesel, but we won’t until 2015. The Macan S starts at $49,900 and the Turbo at $72,300. For that price difference, the Turbo better sprout wings and/or do magic tricks. The only Cayennes (which are both bigger and more powerful) that are more expensive than the Macan Turbo are the GTS, Turbo and Turbo S. Of course, knowing Porsche, the Macan Turbo is probably spectacular, and anyone with enough money to buy a Porsche would easily be able to justify it.

The Macan hits our shores in April, and Porsche is already gearing up to increase production in light of the anticipated demand. Given that SUVs are such a volume segment, it’s hard to argue with luxury carmakers branching out in that direction. One would hope that the more revenue generated by SUV sales, the more money the company will then invest in its sports cars. With Bentley, Lamborghini and Maserati planning to add SUVs to their lineups, I say this to comfort myself.

But at the end of the day, it still seems kind of wrong, doesn’t it?

The luxury SUV is here to stay, though; at least the Macan is a looker. Hopefully it will drive more like a sports car than a Big Gulp on wheels.