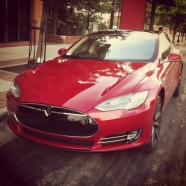 The title of this post is the answer to a question that doesn’t even need to be asked. Just watch the following video, and be amazed.

Tesla is up to a lot these days, including cross country trips relying solely on Tesla “Supercharger” stations and $0 of gas. I previously expressed surprise that the industry was surprised at Tesla’s success. I admit, though, to being a little surprised myself that the Tesla Model S P85 (the performance version) beat the brand new Corvette Stingray in a drag race. Damn electric-mobile has a 4.2-second 0-to-60 mph time. Well played, Tesla. Well played.

Since I’m on a configurator kick, I went to the Tesla website and built myself a Model S. Tesla only allows you to share configurations via Facebook, Twitter or e-mail, so I’ll just tell you that I built a quite lovely red P85 with panoramic roof, Ultra High Fidelity Sound and Premium Interior Lighting. The bottom line? $96,070 AFTER the $7,500 federal tax credit.

Let’s see something in the $30-50k range, Tesla. Don’t tell anyone, but I’d seriously consider it.