Porsche continued the rollout of all 5 million iterations of its new 991 series 911 model with the premiere of the new 911 Targa 4 at Detroit. The Targa is distinctive from other 911 models because of its movable roof section – a unique cross between coupe and cabriolet. I snapped a few photos to show you the operation of the roof. 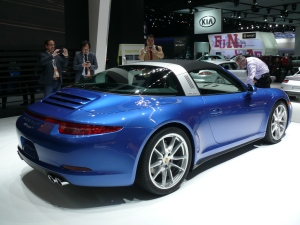 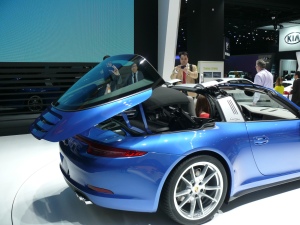 What goes down must come up… 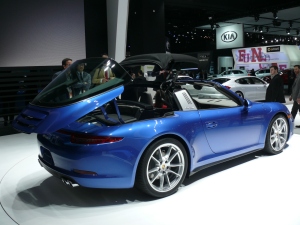 The Targa has been around for years, and is available only in all-wheel drive (hence the “4” and “4S” you will see on any Targa). Porsche has more technical info on the roof system itself. Blah blah blah whatever. It just looks cool. The chrome piece in place of the B pillar does create a bit of a basket handle look. But I have always liked that the Targa has distinctive design elements.

Jalopnik has a good explanation (in plain English) of the roof mechanism, along with an animated GIF showing its operation. Because it never quite occurred to me to shoot video…

(I also like Jalopnik’s technical take on the roof: it’s bonkers.) 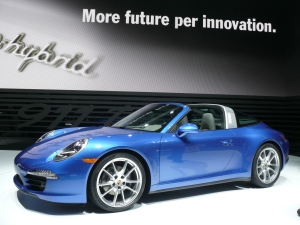 The Targa is the idiosyncratic 911: not a true cabriolet, but with the added weight of the magic roof mechanism, so not quite as performance-minded as the coupe versions of the 911, 911 S, Turbo, etc. I’m always up for a little idiosyncrasy, though, which is probably why I like it. (Although it’s no 918 Spyder!) 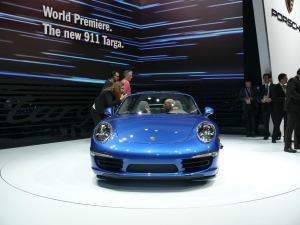 Either way, it’s a looker, isn’t it? With a magic roof.