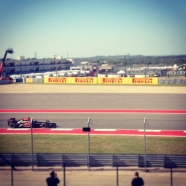 The 2014 season of Formula 1 kicks off in Melbourne, Australia one week from today, and everything, from the cars to the people to the rules, will look a lot different. Allow me to walk you through it (thanks to Autoweek and the various racing Twitter feeds I follow for making all this relatively clear).

There has been quite a bit of musical chairs in the off-season. Only Mercedes and Marussia retain their 2013 lineup. Some drivers switched teams, some are gone from F1. Here’s a look at each team:

Red Bull was the winning team of 2013, amassing a mammoth 596 points (second place went to Mercedes, with 360). Four-time champion driver Sebastian Vettel returns. His teammate Mark Webber has retired from F1, and is being replaced by Daniel Ricciardo, previously of the Scuderia Torro Rosso team, who is getting the opportunity of a lifetime. All eyes are on Vettel and Ricciardo to continue Red Bull’s dominance. Major technical changes (explained further below) may put a damper on this, however, as disastrous early testing in Jerez, Spain and Bahrain could indicate.

One of my favorite teams, Mercedes returns with its solid lineup of Lewis Hamilton and Nico Rosberg. As one of only two teams to develop its own engine and chassis (Ferrari is the other), Mercedes has enjoyed early testing success with its new F1 W05 car. All indicators point to a strong start in Australia.

Ferrari has the superstar lineup to watch, adding longtime fave Kimi Raikkonen to the roster alongside the returning Fernando Alonso (second in points in 2013). These guys will put Ferrari in the hunt for a constructor’s championship in a strong way.

Lotus is much-changed from the end of the 2013 season, with big-name driver Raikkonen decamping to Ferrari and the team principal gone. Returning driver Romain Grosjean had an excellent 2013 season and should do well again. Pastor Maldonado comes over from Williams (disappointing many Lotus fans, including me, who hoped Lotus would choose talent – such as Nico Hulkenberg – over the well-funded Maldonado). Oh well – Lotus remains a favorite of mine. Worryingly, they have been plagued with early development problems, consistent with other teams running the new Renault engines…

McLaren had a tough 2013, finishing 5th in team standings and dismissing driver Sergio Perez after only one season. Jenson Button returns, and is joined by Kevin Magnussen (son of Jan Magnussen). With the Mercedes hybrid engine and the new MP4-29 chassis, early testing looks promising. Hopefully, McLaren is in line for a strong season.

Force India is a scrappy team formed only in 2008, and adding the Mercedes engine to the mix should only help this year. Nico Hulkenberg, a former Force India driver, returns after a year at Sauber, and Perez comes over from McLaren. I like Hulkenberg a lot, and look forward to seeing strong performances from him in 2014.

After switching places with Hulkenberg, Adrian Sutil is on the Sauber roster, along with the returning Esteban Gutierrez. Hulkenberg put Sauber on the map last year; Sutil and Gutierrez have traditionally been less effective. At least Sauber runs the Ferrari engine, not the trouble-plagued new Renault powerplant.

Torro Rosso was notable last year mainly for having distinctive, galloping red bulls on the sides of its cars. Daniel Ricciardo has been promoted to Red Bull, and Jean-Eric Vergne returns. Russian Daniil Kvyat has been called up from F3 to join Vergne. Torro Rosso uses the Renault engine, so expect early issues.

2013 was an unmitigated disaster for Williams, with an overall 9th place finish (out of 11 teams). In fact, the past few years have been rough. Williams has a strong team this year, though, and is being widely touted as the team to watch. Impressive driver Valtteri Bottas returns, and Felipe Massa comes over from Ferrari (where Raikkonen took his seat). Williams uses the Mercedes engine, and also has the distinction of featuring a female test driver, Susie Wolff. I’ll be rooting for Williams this year!

Formed only in 2010, Marussia returns with last year’s lineup, drivers Max Chilton and Jules Bianchi. Marussia is a peripheral team, but its Ferrari-sourced engine may offer some hope for 2014.

Caterham, another marginal, created-in-2010 team, has ditched both its 2013 drivers for the returning F1 driver Kamui Kobayashi (formerly of Sauber, before taking 2013 off to race Ferrari sports cars) and GP2 driver Marcus Ericsson. To top it off, Caterham’s engine partner is Renault. Gah.

This is all over my head, but here it is in a nutshell: Everything is different this year. V8 engines have been replaced with a 1.6L V6 with turbo direct injection and a 15,000-rpm limit. Drivers are limited to five engines over the course of the season, down from eight. Cars are limited to 100 kg of fuel per race, down a third from 2013. Gearboxes are now eight speeds, rather than seven, and teams can adjust their gear ratios only once per season (not per racetrack, rather a major change). Additionally, gearboxes must be used for at least six straight events (an event is defined as qualifying or a race). The nose tip has been lowered to reduce the risk of flipping; hence, the widely-mocked phallic designs of almost every car’s new front.

These new requirements mean that every team had to develop/build/buy a new chassis and engine. Mercedes, Ferrari and Renault are the engine suppliers for F1, and Renault has gotten walloped in early testing with its new, troublesome power unit. All teams running Renault engines, most visibly Red Bull, have experienced significant problems in the Jerez and Bahrain testing. Teams with the Ferrari- and Mercedes-sourced engines have fared better, but everyone is making extensive adjustments. This may be as good an example of an “all bets are off” season as we are likely to see in Formula 1, at least from a technical perspective.

And don’t be fooled – it is the technology that matters these days. Sure, a truly talented driver may be able to generate some interest even in a middling car, but to the technological victors (read: Red Bull the past several years) go the spoils.

The drivers now have numbers, like a damn American sport, and the final race of the season, in Abu Dhabi, is worth double points. There are also a bunch of new or revised penalties, all of which sound boring but no doubt affect each team’s race strategy.

In other words, 2014 is going to be an interesting, possibly awkward, and no doubt exciting season for Formula 1! Check back for all the updates!