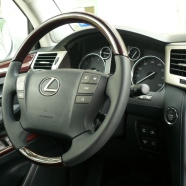 Posted by Motorista on April 26, 2014 in Driving, Opinions, Ponderings, Reviews | Leave a comment

First, let’s create a little context. The Lexus LX 570 is not only an SUV, it is the largest of three SUVs that Lexus offers. To a MINI driver, it slightly resembles a ship. 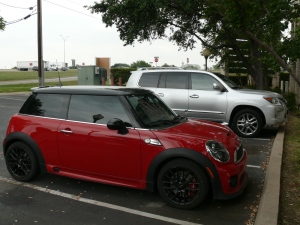 As you can see, my roof barely scratches the top of the Lexus’ beltline. So, I had to adjust my perspective.

To a leadfoot who rarely needs to haul more than one human and two dogs (who can be thrown in the boot), and who is generally willing to forego comfort for driving thrills, the idea of an 8-passenger houseboat on wheels is one that I can only appreciate conceptually. While being distracted by thoughts like, it’s so big. And boxy. And houseboat-like. How can it even accelerate from a standing start? Do people really need to haul entire baseball teams? Lexus describes the construction of the LX 570 as a “welded-steel body on box-section ladder frame.” Yes, and it looks exactly like that. 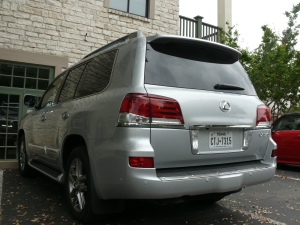 But, as these stories often go, I found myself surprised. Was it Fantasia that had elephants in tutus? Whatever it was, the LX 570 kind of reminded me of that. It looks ponderous, but it doesn’t feel that way on the road, at least not from the front passenger’s seat. The 5.7L V8 engine produces 383 hp and 403 lb-ft of torque, which is quite adequate for hauling this 6,000-lb colossus down the road lurch-free and without hesitation. Dare I say it almost felt nimble? Good grief.

And then there’s the comfort, and lots of it. I have been in a week-long argument with the MINI ever since the dealership moved my seat during a service visit, rendering it IMPOSSIBLE for me to rediscover the sweet spot. I have been achy and cranky ever since, which does nothing for my forget-comfort-performance-first cred. I truly have been uncomfortable for the last week, but not in the Lexus. The Lexus is a road-trip car. My back and posterior, cantankerous as they are (it’s true; I have chronic back problems), would not protest a long spell in the LX 570’s chairs. Practicality 1, Motorista 0.

Even beyond the seat, the LX 570 is a pretty nice place to spend time. Anything you would touch and anywhere you would rest a limb (Do the professionals perhaps call these “touch points”? How would I know?) is plush and soft and fairly inviting. The thing’s as cavernous on the inside as it is on the outside. 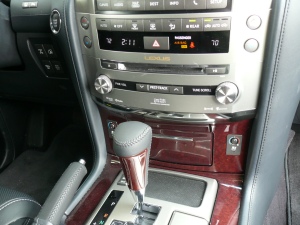 But Lexus gets points for having fancy bells and whistles, including – wait for it – its own branded, noise-cancelling headphones for backseat passengers. 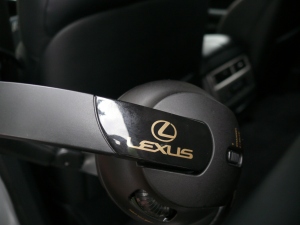 Presumably, these speakers are to be worn while watching the cinema selection of one’s choice. And adjusting your fancy climate controls. I would not protest such amenities.

The LX 570’s exterior styling reminds me, a bit too much, of its brand sibling, the Toyota Land Cruiser: mostly boxy and occasionally bulbous. Check out the side view of the headlight:

To my eye, the shape doesn’t quite create a coherent whole and is not overly interesting, which is a complaint I have about almost all Toyotas and many Lexi – although the new performance-oriented Lexus sedans are starting to look quite promising. Still, the LX 570 is undeniably more polished and expensive-looking than the Land Cruiser. And the newish Lexus grille is growing on me.

See the black dot under the Lexus badge? It’s a camera that generates a number of different viewing options in the navigation screen. Lots of nifty electronics, this Lexus.

What I’m really smitten with is the rear liftgate. You lift up the top section, like so…

Then the bottom part drops, automatically, with the push of a button. Magic…Also, in a move much appreciated by smallish people like me, the load height is quite low, so you are not lifting up and in when loading metric tons of groceries into the back. Again, a point for practicality.

Where all the things go. Including the three passengers you wish to trap in the third row.

Oh, and look. You can adjust settings and stuff and things. Sport mode (dial on the far right) is a requirement, in my opinion. Look – there’s a point for Motorista. I am still here after all.

At the end of the day, the Lexus LX 570 is a well-appointed, electronically-loaded, serious-looking luxo-barge that makes sense for high earners who set high importance on comfort and need to haul lots o’ bodies (preferably live ones; there is really not THAT much room in the boot). Because it does not feel nearly as ponderous on the road as you might expect, I have to give Lexus kudos. The fact that I remain a non-believer in gigantic and expensive SUVs certainly is not Lexus’ fault, and the LX 570 even went some way toward persuading me that such a vehicle is sensible.

But…nah. I remain unconvinced that we Americans need nearly as much crap on four wheels as we think we do. I know I’m a minority, though. And for the majority – or, at least, the wealthy majority – Lexus has made a monster SUV that you would no doubt be quite satisfied with.

And if you were planning to chauffeur me on a long road-trip, I would very much hope you had one.