Home » Driving » The High Up Life

The High Up Life

Posted by Motorista on May 9, 2014 in Driving, Opinions, Photography, Ponderings, Reviews | Leave a comment

Having driven a Mini almost every day for the past ten years, I take for granted that I’m low to the ground and darty like a mosquito. Isn’t that simply how driving is?

No, actually. The other day, I drove a Mercedes-Benz GL450 SUV on an out-of-town work trip. To give you some context, Mercedes makes three SUVs. Well, four, actually, but we’re not counting the G-Wagen, because it does not exist for mere mortals (I love its obnoxiousness). As to the three real SUVs that Mercedes makes, the GLK is a wimpy little crossover, the M is a mid-sized SUV and the GL is the big beast. It seats seven and is larger than my living room.

Going from the Mini to the GL is kind of like this:

I was prepared to feel like a bus driver or ship captain. I really needed a stepladder for ingress purposes. Packing extra oxygen in with my papers and pens wouldn’t have been a bad idea, either.

Just look at that unyielding facade: 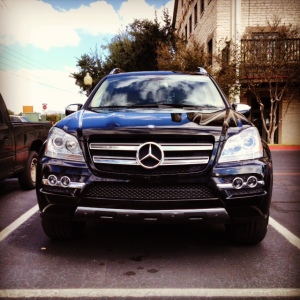 Once ensconced behind the wheel, I was amazed/bemused to discover that in some vehicles you can see completely over the steering wheel! Who knew? There’s so much space and road out there. And it’s all so far away.

What really threw me off was looking over at the car next to me and being able to see inside it. And TRUCK DRIVERS. I actually saw the face of one, not just the underside of the left arm. It’s like a whole new world up there where everybody else is! 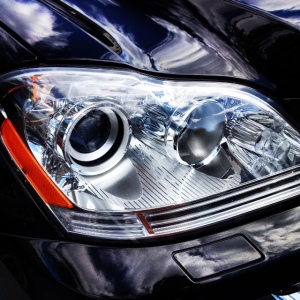 Not surprisingly, the GL is very comfortable and cosseting. The seats are plush, the cabin light and airy. As is typical for a Mercedes, the build quality is excellent. This biggest of Benzes is a pleasant place to hang out.

Somewhat surprising, at least to me – it’s good to drive. I have a low opinion of SUVs in general, as a rule. I don’t believe that we Americans need nearly as much space as we think we do, and what better way to waste time and money than to lurch about in a ponderous, fuel-guzzling, non-aerodynamic box on wheels. Plus, they’re just generally inelegant. My solution to hauling things from Home Depot – get a convertible and put the top down.

Unfortunately, because I love being right, the GL proceeded to disprove most of my rants. For a big beast that weighs 5,300 lbs, it feels pretty nimble and light at speed. The 4.7L V8 under the hood can’t hurt. With an output of 335 hp, it propels the Benz-o from rest ably and without hesitance. And once you get up to speed…you keep going. I’m an admitted lead-foot, but I would glance down at the speedometer in surprise, because I just didn’t feel like the GL and I were going that fast. [For context, allow me to add that the speed limit on this particular highway was 85 mph. So it’s not like I was breaking the law…]

By the end of my adventure, I felt quite comfortable in a mighty SUV. I wouldn’t recommend the GL for autocross, but for a long drive at a fast clip in comfort, it’s just the ticket. And, to my eyes, it looks quite nice, too.

← The Corkscrew The Mad Skills of the Scion xB →