CTS Vsport – Not Your Grandmother’s Cadillac

Posted by Motorista on May 26, 2014 in Driving, Opinions, Photography, Ponderings, Reviews | Leave a comment

To borrow slightly from a common saying, what floats like an aircraft carrier and stings like the world’s largest wasp’s nest?

Here’s the background: beginning with its renaissance in the early 2000s (remember the splash the all-new CTS made in The Matrix Reloaded?), Cadillac has increasingly focused its efforts on building more luxurious and performance-oriented cars to compete with its German rivals. This culminated with the “V” cars – high-performance variants of existing vehicles. The CTS-V was even turned into a race car for the Pirelli World Challenge. Its exhaust note, which can only be described as the sound of God clearing his throat before unleashing hellfire and brimstone, is divine.

I’m a fan of Cadillac. Its design language is unique and fearless and, year after year, matches consistency with improvement. Its move away from Grandma cars towards enthusiast machines is being done intelligently, without putting all its eggs in one basket or abandoning the older demographic that kept it alive in the ’80s and ’90s. Your grandparents would be happy in a Cadillac XTS, but so would you.

For this coming year, Cadillac has introduced a new trim level, the Vsport. The Vsport gives more performance-minded buyers an additional option between the base car and V car (which adds, I’m guessing off the top of my head, $20k+ to the sticker price). I want, nay need, a CTS-V, but the Vsport trim makes some of that performance personality somewhat more attainable for the average Motorista.

So when my friend, Derek (he of the media fleet cars), obtained a new CTS Vsport for journalistic purposes, I jumped at the chance to snag a ride-along. 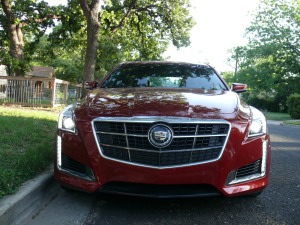 The CTS, which features a revamped design for the 2014 model year, is all sharp lines and creases, an aggressive and sporty design language I happen to love. There’s a lot going on, and a lot of it’s mighty nice, particularly when viewed on the road at speed. 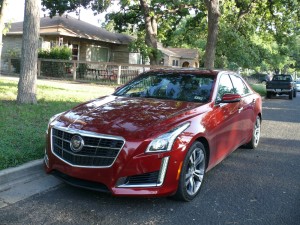 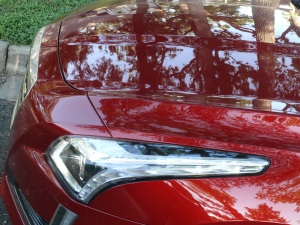 I’m not wild about the rear, which manages to be both pointy and bulbous at the same time. And it makes the car look too heavy in back. I’d prefer shorter and squarer myself. 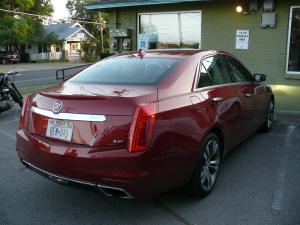 The taillights have some nice details, though. 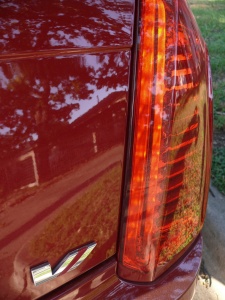 And the exhaust, while not quite hellfire and brimstone, produced a delightfully rich burble that I could listen to all day long. 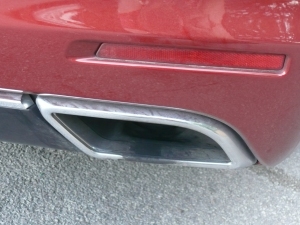 Overall, this machine has a presence as commanding as any of its German counterparts.

And, not to be a hater, but coming from General Motors, that is a downright miracle. 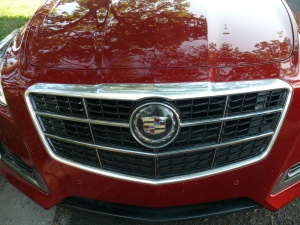 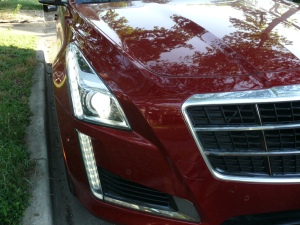 Also, this color is called Red Obsession. Love it! 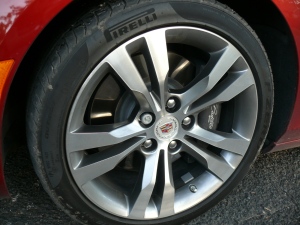 Pirelli P Zeros. Cadillac is not playing around.

Not to be outdone by the exterior sheet metal, the CTS Vsport’s interior is, for a GM product (again, sorry I’m not sorry), a fantastic improvement. This particular car had a full leather interior, with lush surfaces and touch points. It’s money! 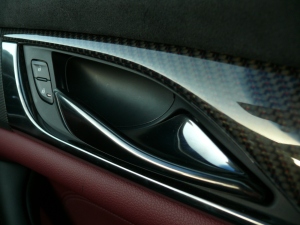 My favorite interior feature was the door handle – a work of art, and perfectly fitted for the hand.

The tastefully-designed center stack, with the recurring V-shape motif. 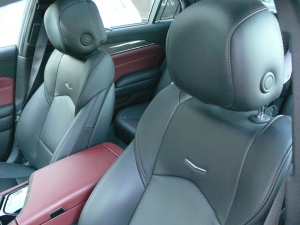 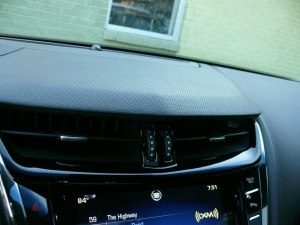 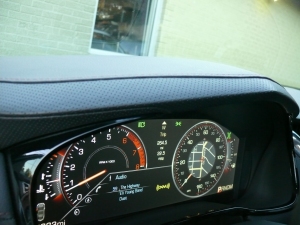 The gauges are digital, which is the new wave of interior design and onboard communications.

I love gauges as a design element, and so am of two minds about digital displays. I do like the various options – you can switch between different displays – and Cadillac has done a good job of integrating a lot of information and options without creating visual overwhelm. Still, I’m old-fashioned at heart. I like real gauges.

Most importantly, you ask, how is the CTS Vsport on the road??

I can only speak as a passenger, but the overall impression I came away with: I WANT TO DRIVE IT. NOW, NOW NOW. So, yeah, it was pretty good.

The Vsport (which is rear-wheel drive) packs a 3.6L twin turbo V6 producing 420 hp. It also boasts a performance suspension and Brembo performance brakes. In plain English: it hauls ass. The ride is pretty smooth for a big, beefy sedan, but not overly cosseting in that anodyne Lexus way. It’s beastly, but not punishing.

Sadly, this comes at a price. The Vsport pictured here stickers at over $70,000. Yeah. So as much as I’d love to include the CTS Vsport on my shopping list, that’s not going to happen anytime soon. Instead, I could get an entry-level BMW, Mercedes or Audi that would likely retain more of the performance characteristics than the entry-level Caddy. Ouch.

I love it, though. It’s a big, brash American performance sedan with all of the characteristics I love in the Germans. But it doesn’t feel like Cadillac is trying to be German or make itself into something it’s not. It’s simply developing characteristics that are desirable in any car, regardless of the nationality of its manufacturer. And that’s a huge accomplishment.

Keep up the good work, Cadillac. I can’t afford you, but I’ll cheer you on regardless.