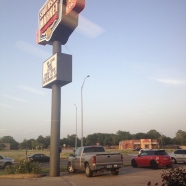 Lessons learned at the IndyCar Houston Grand Prix: rain won’t kill you, and the world’s best hamburger is made in a school bus.

Dad shared his version of the weekend with you a few days ago. Now you get to hear what really happened. 😉

The weekend began at 5:30 a.m. for me, which would be rough regardless. However, I hadn’t gotten to bed until 1:30 a.m., having laughed my fool head off at an Eddie Izzard show in downtown Austin on Friday evening. Poor Dad, who had arrived at my house Friday evening, had to feed and entertain himself, and was fast asleep by the time I got home. Four hours later, I was up and at ’em.

An IndyCar weekend goes like this: prior to the actual race, there are practice sessions and then a qualifying session, which determines what place each driver will have at the start. On the typical, one-race weekend, qualifying takes place on Saturday afternoon, with the race on Sunday. On a doubleheader weekend (like Detroit), there are races on both days, and the qualifying sessions take place the morning of the race. Dad and I decided to head straight to the track (3 hours away) to catch the 10 a.m. qualifying. So we loaded up the Red MINI with overnight bags, camera and rain gear (more on that later), and hightailed it down the road to the place-formerly-known-as-Reliant Arena (where the Houston Texans play), and where the Houston GP team builds a temporary street track in the parking lot.

We arrived just in time to catch the back of Helio Castroneves. Literally. 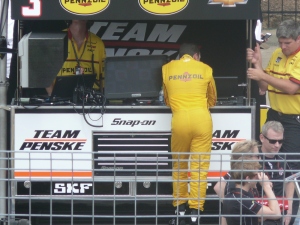 Doesn’t he have a cute tush??

The day was overcast and the clouds looked slightly threatening, but we decided to forego the rain gear…I believe my reasoning was something like, “Aww…it’s too big. I don’t wanna mess with it. It’s not going to rain.” 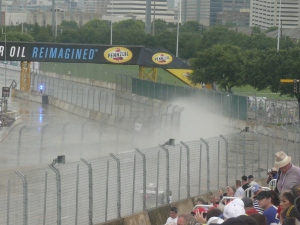 For awhile, it was just scattered drops. Then it poured. Everyone around us either scurried out of the stands or busted out their giant umbrellas. Dad and I just sat there, dripping. And laughed. And laughed some more. We got pretty soaked, but we were happy as clams. Water dries, bodies dry, we were at a racetrack – it was just all good. 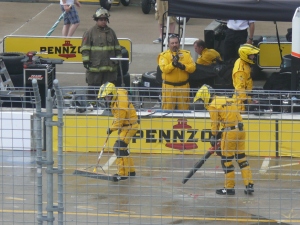 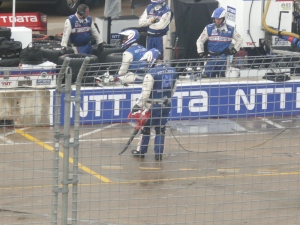 One of my seat neighbors kindly offered me a garbage bag for my bag o’ gear (camera, phone, etc.). It worked quite nicely, less so on my head. But you can see the good time we were having! 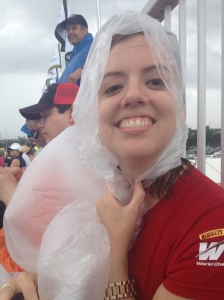 And did I mention our seats were nifty? I have learned that seat selection is an art – finding just the right spot with good sight lines, etc. I generally prefer the main grandstand, with a view of the pits and hopefully a look at the first and last turns. We were in the main grandstand last year, with a great view of the final turn, where drivers seem to like to wreck. This year, same grandstand, but seats overlooking the start-finish line. 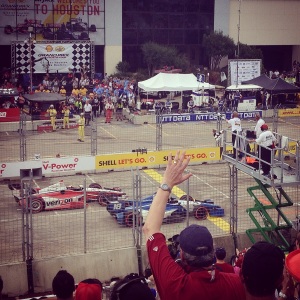 Not bad, eh? That was our view of the conclusion of Race 1 on Saturday, when rookie Carlos Huertas (in the blue #18) went from dead-last to, uh, winning. It was a very exciting race, half in the rain, half in the dry, and it sure was cool to see a winner with 250 to 1 odds. Gotta love IndyCar. And the fact that all three drivers who made the podium were Colombian. Pretty sure THAT was a first.

Following that mildly revolutionary finish, and still slightly damp, we packed back up and headed farther south to my sister’s house. (Yea for hospitable family!) Wherein we got take-out Chinese and I got the most prophetic fortune ever: 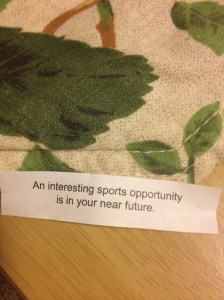 You think it involves a helmet??

Well-rested and -fortuned, we headed back to the races Sunday morning, because fun x2 is always best. We spent the drive placing bets on who we thought would win, then forgetting our picks, then remembering them again. They may as well have stayed forgotten – you just never know what will happen in IndyCar.

Sunday was dry as a bone…and HOT. We ended the day a bit more crispy than we started. Still, as always, it was worth it.

In Race 2, two (different) rookies took second and third place. And, similar to the day before, the third place winner had started dead last. And the podium consisted of a Frenchman, a Russian and a Brit. Ah, IndyCar, that American pastime. 😉

MOST importantly, Dad and I ate quite well. On both days, we got burgers from Bernie’s Burger Bus, which Dad proclaimed the best burger he had ever eaten. I concur.

There’s Dad in his Cadillac Racing t-shirt, scoping out Bernie’s.

At the end of the day, sweaty, sunburned and with goofy grins on our faces, we piled back into the Red MINI and headed back to Austin. As the sun set, we pulled in to the parking lot at the Southside Market in Elgin, Texas for our last adventure – a scrumptious dinner of barbecue, a perfect finale to our racing weekend. 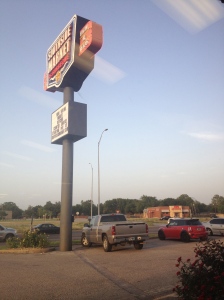 All in all, a perfect weekend. 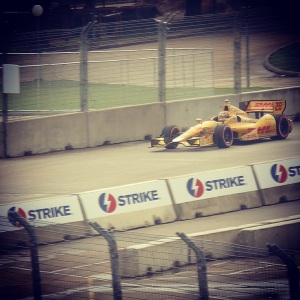 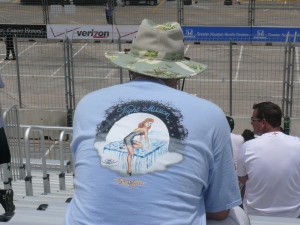 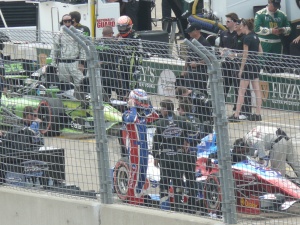 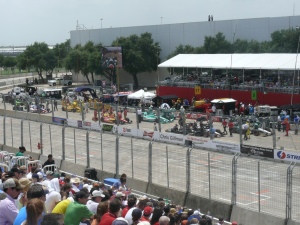 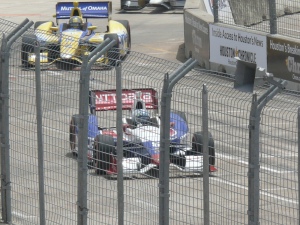 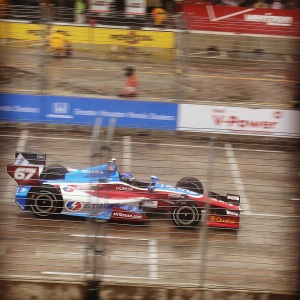 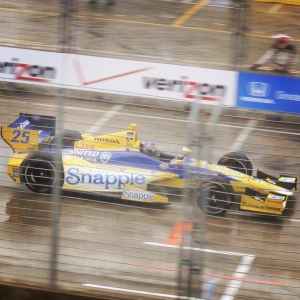 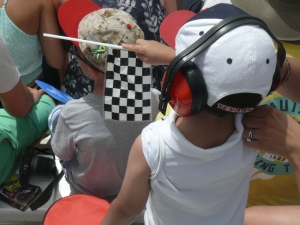 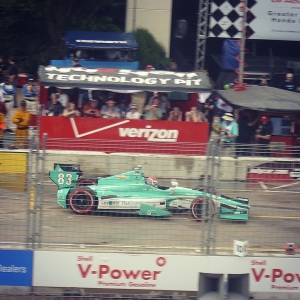 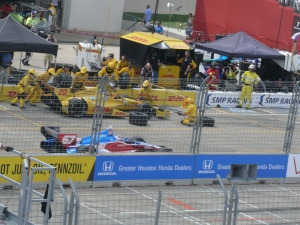 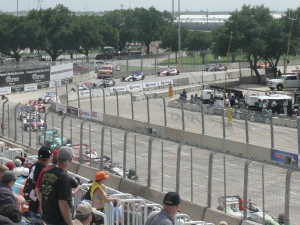 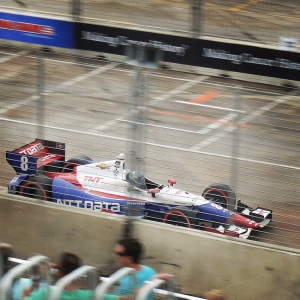 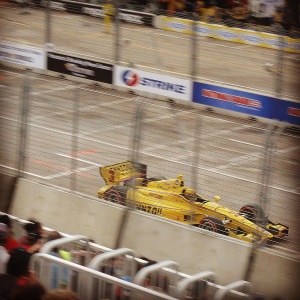 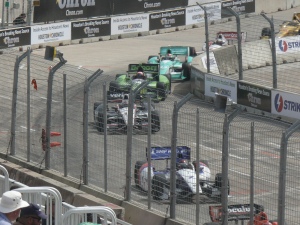 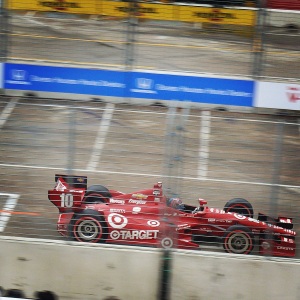 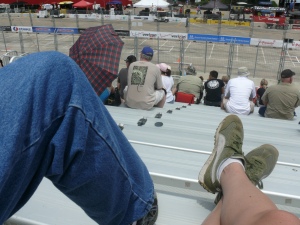 Can’t wait for the Third Annual Father-Daughter GP! So fun to spend time with my dad, doing something we both get a kick out of. Thanks, Houston GP, for giving us a reason!