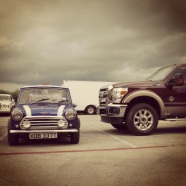 Howdy, race fans! It has been much too long since we’ve had a chat. Here’s what I’ve been busy with in the last month or so:

Rappelling was the easiest.

Now that I am quasi-grown-up and mature and doing things that carry lots of responsibility for others, I am having very concerning thoughts…like, what if I really DO need a bigger, more adult car?

In case you don’t know, I have been a Mini driver since 2004 and the proud owner of a badass Mini John Cooper Works pocket rocket since 2012. I have been philosophically opposed to large vehicles, especially SUVs, for as long as I’ve cared about cars. (I make an exception for trucks. I get it that they have actual utility.)

Occasionally I have seen the benefits of a larger car, despite my small-car syndrome. I have even grown to love a particular 2010 Mercedes-Benz GL450, which conveyed me safely between Austin and San Antonio without fail during that mammoth 8-week trial last fall.

Now, I look at my new roles and my new needs, and I cannot quite get away from the idea that I may need a slightly bigger car.

ALSO, I am now convinced that my parents need a bigger car.  They drive a cute white 2007 Volkswagen Rabbit (the present-day version is the Golf), which was an awesome value when they bought it in ’07.  The Rabbit is a hatchback like the Red Mini, and I still maintain that a hatchback has incredible utility. I’m not worried about my parents having enough cargo space. I want them to be HIGHER off the ground. Because I now think that’s SAFER.

It has always been my position that the Red Mini is quite safe because it’s very maneuverable (which has saved my bacon on more than one occasion) and has a wide, planted stance. Give me that over a tippy SUV or truck any day.

But now I think my parents should be a little further from the pavement.

What is happening here? Am I maturing? Was I wrong before? Am I wrong now?

Of course, the most interesting question is…what car should I get?  🙂

P.S. The Red Mini is not going anywhere. She may get a sibling, but she will NOT be traded in.