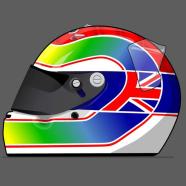 Posted by Motorista on August 31, 2015 in Motorsports, News, Ponderings, Uncategorized | Leave a comment

The 2015 IndyCar season ended yesterday, in a thrilling finish at Sonoma Raceway that left the season’s champion undetermined until the last turn of the last lap. It was pure, unadulterated racing.

It also took place under a pall as grim as I have ever seen in any race paddock.  The reason – on Aug. 24, we lost a great man and a great race car driver. Justin Wilson suffered a severe head injury in a freak accident at the penultimate Pocono race on Aug. 23, when a piece of debris catapulted into his helmet. I was watching – and tweeting – at the time. It took three days to shake the feeling in the pit of my stomach.

Wilson was airlifted to the hospital, but never regained consciousness. He died the following evening.

The last IndyCar driver to die in a racing accident was Dan Wheldon, all too recently in 2011, yet long enough ago that we had become complacent in our spectating. We saw these cars flip, hit walls at 200+ mph, turn end over end over end. And that was just this season! We saw James Hinchcliffe nearly bleed to death when he was impaled by a piece of his car in a crash. But these were almosts, near-misses, close shaves. You held your breath for a minute, then exhaled in relief, as each driver climbed out of his (or her) battered car, sometimes slowly, but still.

The stillness is the worst part. The wreckage of a race car rests on the track, and all is still. Usually, you see a thumbs up from the driver or the movement of a helmet. But there was no movement, only stillness. Then the safety crew is running to the car, which is normal. But then more are running. They are swarming the car. Someone lifts out the steering wheel and tosses it aside. The safety crew is usually very careful of the car, as long as the driver is not in danger. There’s no time for careful here.

We all knew it was bad, from the shaken commentators to those of us at home with that feeling in our stomachs. We hoped and prayed. We looked for comfort in statistics. Yet I couldn’t help thinking of Formula 1’s Jules Bianchi and his ultimately fatal head injury. On Monday evening, when IndyCar announced there would be a press conference, I think we all knew.

The outpouring of love and support for Justin Wilson and his family from the entire racing community reflects Wilson’s on-track reputation for extreme skill (indeed, his nickname was BadAss Wilson) and his off-track integrity, two traits that made him one of the most respected figures in racing. The statistics belie Wilson’s importance to the sport. Although he was one of few drivers to compete in both Formula 1 and IndyCar and won a handful of IndyCar races, as well as the 24 Hours of Daytona sports car race in 2012, he was not a record-breaker or a flashy celebrity type. He was a quiet family man who usually raced for small, cash-strapped teams and who sometimes struggled to get enough sponsorship money for a full season of IndyCar racing. At the time of his death, he had a part-time contract with Andretti Autosport, and there was hope that his good results this season would result in a full-time drive in the #25 car in 2016. In the last IndyCar race he completed, at Mid-Ohio on Aug. 2, he brought the #25 home in second place, earning a podium finish.

We call Indy 500 winners champions, as well as the driver who wins the Astor Cup at the end of each IndyCar season. Yet, in my mind, Justin Wilson was more of a champion than any of these drivers. He was a true champion because he was excellent at his craft, he did what he loved, and he lived with integrity. His competitors and peers respected him as a race car driver and loved him as a man. In the wake of his accident, and then death, no one could remember an ill word that Wilson ever said or that was ever said about him. And this was not the result of paying homage to the departed. This was genuine.

This beautiful piece was written by David Malsher, editor of Racer Magazine, the night Wilson died. It speaks volumes about the man Wilson was.

Among many tributes IndyCar paid to Wilson in the leadup to the series-ending race in Sonoma yesterday, one of the loveliest took place on the Golden Gate Bridge, with Marco Andretti, Wilson’s teammate and friend, leading a procession of Indy cars in Wilson’s #25 machine.

And, finally, here is Tony Kanaan, summing up the entire gamut of emotions better than any of us can:

Oh man, my heart is aching another friend gone. Godspeed to one of racing's truest gentlemen. #justinwilson

Why do we do this? Because we love it, don't want to be anywhere else but a race car. We will keep your legacy my friend. Racers race.

To a true gentleman, rest in peace.