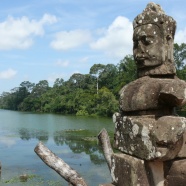 It’s hard to adequately describe the smell of Cambodia. It is a combination of sweet and acrid, with notes of smoke and garbage. Sometimes nice, sometimes not nice at all, the various elements travel together on a continuum that follows you wherever you go (except, for the most part, the temples). That aroma was my first sensory impression of Cambodia. It took some getting used to, but once I did, its familiarity was kind of comforting.

I spent five nights and four days in Siem Reap, Cambodia, the city nearest to the Angkor temples. Cambodia is a complicated place. Like its aroma, it contains so many juxtapositions – wealth and poverty; beauty and squalor; history and modernity; backwardness and ingenuity. I stayed in a very lovely home, in a neighborhood containing other nice homes, alternating with places that make American trailer parks look like the epitome of luxury. During the rainy season, which was just beginning when I was there, the red earth turns to mud and trash collects in the muddy ditches. The main roads (where the tourists are most likely to be) are paved and nicer than some roads in the U.S. (I’m looking at you, Michigan), but most of the side roads, on which people live, consist of that bumpy red earth and are either mud, if wet, or dust, if dry. You want sunglasses or a scarf to keep the dust out of your eyes. Forget about staying clean all day. Just take another shower at night!

Also, Cambodia is HOT. Being from Texas, that didn’t bother me as much as some, but it is also a different type of heat, again hard to describe. It is quite humid, but not in any way that is similar to Houston. The heat and humidity are just kind of bumpy and pervasive, like the roads. But then an afternoon rain comes and cools everything off, and Siem Reap feels a lot nicer than Texas!

The roads are filled with bicycles and motorbikes. There are cars, too – mostly Toyotas and Lexuses. But the vast majority of Cambodians, at least in Siem Reap, ride some type of bike. Some tourists do, as well, although I absolutely would not nor recommend that anyone else do it, until you have been there awhile. There are very few stop signs (ignored) and stop lights (somewhat observed), and anyone used to American traffic rules would likely get yelled out, if not run over. This isn’t unique to Cambodia – I saw it in Singapore and Thailand as well. Traffic lanes, when they exist, are more suggestions. Faster vehicles are constantly passing slower vehicles, sometimes in the path of oncoming traffic. I was convinced I was going to die in Singapore, but I was a little more used to it by the time I got to Cambodia.

The irony is – it works pretty well! There is a system, of sorts, even though it often doesn’t look that way, and it has the effect of moving traffic along pretty efficiently. Dare I say it works better than our traffic system?? At least you can get places at mostly the speed you want to go. Imagine that!

Still, I recommend using a tuk tuk. Also called a rickshaw in some countries, in Cambodia a tuk tuk is essentially a covered trailer with passenger seating that is pulled by a motorbike. My first introduction to the tuk tuk was when my driver pulled up in one at the airport. Talk about culture shock! I think I played it pretty cool, but I was honestly pretty aghast. Like everything else, though, once I got used to it, it was great. Chenda, my driver throughout my stay, took me all over, to town and to the temples, and the rattle of the tuk tuk over the bouncy roads became another comforting sensory impression.

A word about Chenda, who was one of the best parts of my trip. He was friendly, funny, knowledgable, with a “hee hee” chuckle that cracked me up. He helped me get my three-day pass for the temples, then essentially set my itinerary for me so that I could see all the best ones. He took me to the temples, then waited for me, and could always pick me out in a crowd when I came out, even though I usually couldn’t see him in the sea of tuk tuks. He was unfailingly kind and made my trip so much easier, which meant a lot, since I at first felt a little overwhelmed being alone. When we left to go to the airport at the end of my stay, he said we would take the tuk tuk to my country (this despite the fact he was feeling a little green that morning, following a friend’s party the night before – “You have lots of fun. Then next day, not so fun.”) 🙂 Thank you, Chenda, for taking such good care of me!

Now, the temples. The temples are unbelievable. I visited the Angkor Wat complex, the Angkor Thom complex, and Ta Prohm. I’ll post photo blogs of each when I get home and have some time to decompress. But suffice it to say, the sites are absolutely amazing and should be seen by everyone at least once. I plan on going back and seeing them again, and seeing others I didn’t get a chance to visit this time. It’s hotter than Hades and I would come out dripping with sweat, but it’s manageable. You are supposed to wear shirts that cover the shoulder and pants that cover the knee, out of respect, which doesn’t help the heat situation, but you can wear light clothing and with two or three water bottles, you shouldn’t faint. I didn’t!

There was much more to my trip than the temples, so stay tuned for round two!