Last race, I wished for at least a few lead changes. Hoo boy! Mercedes listened, and served up quite a corker of a race in Bahrain today. Allow me to recount the action via tweet, ’cause wasn’t that fun last time?? It's #BahrainGP time! 6 laps in, and HAM leads from ROS, MAS, PER, BOT. […] 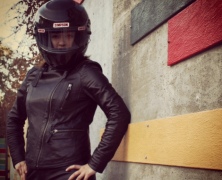 So the weekend turned out to be a bit of a bust on the racing front, despite its potential. Bad weather in St. Petersburg, Florida forced the cancellation of the first race (Saturday) of the Pirelli World Challenge. Then, I slept through Formula 1’s Malaysian GP, despite setting my alarm for the 3:30 a.m. go […]

Yes, I stayed up and followed the Formula 1 Australian GP from 12:30 to 3 a.m. (Texas time). No, I couldn’t watch it on TV or use the Formula 1 App (acting dodgy), so I followed the action through the live timing feature on the F1 website (which included good commentary) and on Twitter. Don’t […]

The 2014 season of Formula 1 kicks off in Melbourne, Australia one week from today, and everything, from the cars to the people to the rules, will look a lot different. Allow me to walk you through it (thanks to Autoweek and the various racing Twitter feeds I follow for making all this relatively clear). […] 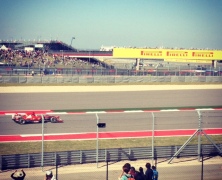 The official schedule for the 2014 F1 season was released yesterday. The USGP is moving from the penultimate race to the third-to-last. Which means – F1 weekend falls on Halloween! You know I’ll be up to no good. 😉 As for other news about the schedule – the mooted New Jersey race will not happen […]

F1 Sunday – the Rest of the Story…

Where was I before real life interfered? Oh yes – the USGP. In my grandstand seat on Sunday, sipping a COTA Flame, waiting for the races to begin. As I write this, the temperature hovers around freezing and the rain is pooling in my backyard. Last Sunday it was 86 degrees without much of a […]

Vettel wins! Surprise, surprise. Still, it was exciting. The battle for 2nd between Romain Grosjean of Lotus and Mark Webber of Red Bull was epic. RoGro held Webber off and took P2. Given that Lotus is one of my favorite teams, I was quite pleased! And exhausted. Go, RoGro, go! Too busy with work to […]

Short day at the track today, as, believe it or not, Motorista does have real-life responsibilities (such as work), that occasionally require a shift in priorities. Nonetheless, I got to see F1 qualifying and the first Ferrari Challenge race, so it was quite a successful time. The big news is that Sebastian Vettel and Mark […]

Those blasted Formula cars are fast. I really had to work to get some good photos to show you guys. It’s funny how you can tell the difference between classes of cars based on the ease with which you can capture them with your camera. After the first F1 practice, the Ferrari Challenge cars held […]

One week until the Formula 1 US Grand Prix! Now that I am such an old hand out at Circuit of the Americas, I keep expecting the F1 drivers to call me for advice. No, Sebastian Vettel has not called yet. But he does have approximately six days… Here’s a cool video that went up […]