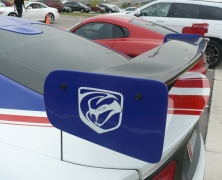 Last Saturday, I claimed a personal record that probably no one else cares about: I spent 15 consecutive hours at Circuit of the Americas, that amazing racetrack less than 45 minutes from my house. If you count travel, that makes for a  16 1/2-hour day. It was delightful. The occasion was the Lone Star Le […]

Another beautiful fall day in Austin, Texas; another fantastic race. I’m a little too tired to attempt the task of recapping a six-hour race (check my Twitter feed for some of the highlights), but I thought you might enjoy my pit visit this morning (again, be sure to click on the photos for a larger […]

The Weekend of Acronym Racing

The workweek is complete. The rain has temporarily abated. My supplies are assembled. It’s time for race weekend, sports fans! The American Le Mans Series (ALMS) and FIA World Endurance Championship (WEC) are bringing an alphabet soup of auto racing to Circuit of the Americas (COTA) this weekend. I admit I am having to do […]

Yes, I’m a bit more chipper than usual. I won’t pack for a trip till the day before, but I already have my itinerary, wardrobe and accessories* planned for this weekend. And it’s only Tuesday. It’s ALMS and WEC at Circuit of the Americas this weekend…AND my very first race weekend in my very own […]