Yesterday I trekked down to Houston to attend a driving event sponsored by Jaguar USA. Having not had the opportunity to spend any time with the new Jags (which are becoming increasingly more desirable each model year), I was excited to see the cats up close and personal. 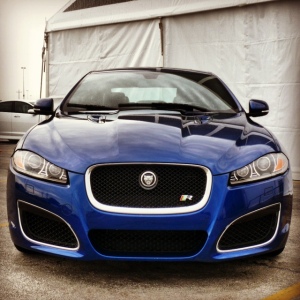 My only complaint about the event is that, although I was  there for over two hours, I probably spent no more than 15-20 minutes total in the cars themselves. That was a pretty big bummer, especially after getting a small taste. Jaguar organized the event so that large groups were constantly rotating through different “stations.” Inviting a lot of people is no doubt more advantageous for Jaguar, as this is more of a consumer-educating, desire-stoking event than a driving experience like the BMW track event. Nevertheless, I wanted a lot more time in the cars. 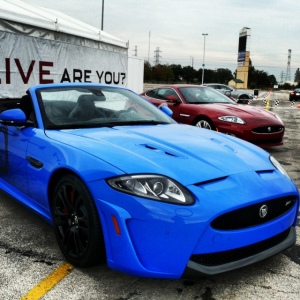 Because they were pretty awesome. There are four current Jaguar models: the XF (mid-size sedan), XJ (flagship full-size sedan), XK (coupe/convertible GT) and the new F-Type (roadster). All four made an appearance in Houston, and in their most desirable variants, too: the XF and XK arrived in both R (top-of-the-line performance trim) and R-S (super-top-of-the-line, limited to 100 in North America) guise, and the new XJR was also featured. (Being brand-new, the F-Type doesn’t have R or R-S editions yet, but its two currently-existing variants were there.) 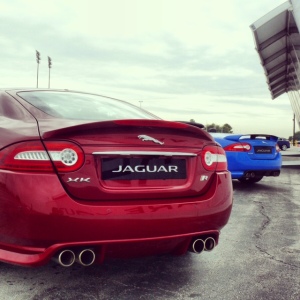 After an introduction to the Jaguar lineup and an overview of the day, we were divided into three groups and began rotating through three different exercises, each of which included an instructor who rode with you. I started out in the Dynamic Mode area, where we got to experience the cars in the “Dynamic Mode” setting, which tightens the suspension, sharpens the steering, etc. We got our choice of three cars (XF, XK, XJ) for two laps of a short autocross (I chose the XK and XJ). The XK and XJ sound amazing in Dynamic Mode – their exhaust systems are bone-crunching. The autocross was so short I didn’t feel like I had the opportunity to really unleash the power of these beasts, but you could certainly feel it there at the ready. Though large, both the XJ and XK felt really agile and smooth. And the interiors were fab – very beautiful and very comfortable. I would be quite happy to spend a significant amount of time in either of those cats.

Next was my favorite part – flogging the F-Type. We got to drive a lap of a different autocross course in both of the available F-Type variants (both of which are fun as hell). The F-Type is small, light, seriously hot, with a beautiful soundtrack – all of the things I love in a car. I felt a little less claustrophobic on this autocross course, and really enjoyed letting the F-Type have it. We definitely liked each other.

The last exercise focused on Jaguar’s all-wheel-drive technology, which is available on the XF and XJ sedans. I drove an XF, first with AWD off and then with it on. Without it, I slid up a slippery incline, spun around on a skid pad (woo hoo!) and bumped over simulated potholes. With AWD on, I hardly felt a thing. Pretty impressive.

Overall, I enjoyed the cars so much, I was disappointed at the lack of time I spent in them. I’m sure that’s by design, but still…I wanted more quality time in these lovely felines.

(Detail of interior door panel on the XKR-S)